This was an exciting week, with two concerts given in aid of two different charities, the first being The Glasgow Art Club and the second being The Accord Hospice group.

The Glasgow Art Club event was on Wednesday 3rd April 2019 and the Accord concert was given in Muir Hall, Uplawmoor on Friday 5th April. The performers were Ralph McDonald (baritone) James Letham (piano) Mary Ann Tear (reader) and they were joined by the newly formed string quartet named Colla Voce. The evening was called Jamboree Musicale and the programme consisted of music through the ages, with music ranging from Bach (middle movement from “Ich habe genug” through to the music of Cole Porter and Flanders and Swann and Michael Marra..There were also readings by Carol Duffy, Noel Coward and Cole Porter.

There was good support from the audiences and both concerts were given to full houses, raising substantial amounts for both Charities. All in all two very enjoyable evenings and my thanks go to my fellow perofrmers for all their hard work and humour. We will be performing again so keep your eyes on his space.

Here are some of the songs from the recital.

Fear no more, Weep you no more & Love’s Philosophy – Quilter

Doing a cameo appearance in “In de Olofspoort Cafe” documentary.

Killing some time in Maastricht train station. Ah… there is a piano. 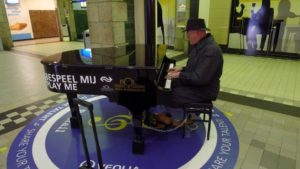